In the wake of the Aurora massacre 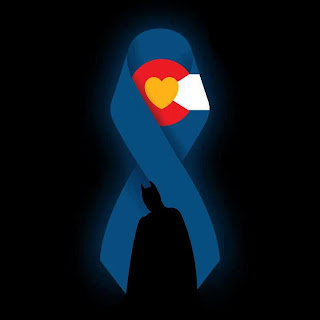 There doesn't seem to be much fans can do to help in the wake of this weekend's mass murder in Aurora, Colorado. For now, Denver Comic Con has posted a Facebook memorial for people to show their support.  If you're in the area, you can try donating blood to the Bonfils Blood Center.

My wish is that people would stop referring to James Holmes as "The Dark Knight Shooter." He doesn't deserve the honor of association with anything Batman-related, the film doesn't deserve the horror of association with him, and the appellation itself sounds like it comes straight from Commissioner Gordon's desk in Gotham City - which he most definitely does not deserve. He's a mass murderer and should not be glorified or remembered with a catchy comic book name.

My sincere sympathies to all of you touched by this event.
Posted by Valerie